↓
Home→Racing News→Zizzo Takes Rust-Oleum Rocket to Provisional No. 1 at the Gators 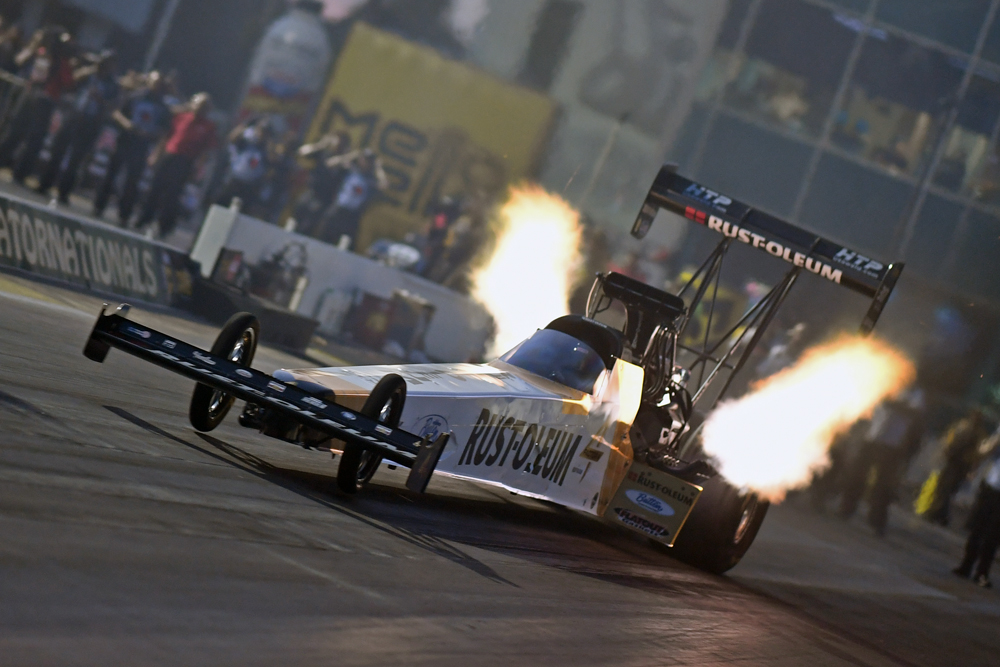 (Photo by Richard Shute, Auto Imagery)Zizzo Takes Rust-Oleum Rocket to
Provisional No. 1 at the Gators

GAINESVILLE, Fla.—In a first of his career, Chicago native TJ Zizzo drove his Rust-Oleum Rocket to the Top Fuel provisional top qualifier position Friday evening at Gainesville Raceway for the 50th Annual Amalie Oil NHRA Gatornationals. Zizzo blasted his way to the top of the charts with a pass of 3.762 seconds at 323.35 mph, just .010 seconds off his personal record ET and the only other driver besides Doug Kalitta to race their way into the .7s.

The second-generation drag racer kicked off the day with a Q1 pass of 3.827 seconds at 320.74 mph during the heat of the day. For Zizzo, sitting atop the class for now is a solid achievement, but his real thrill was seeing the reaction from the Rust-Oleum team.

“Provisional No. 1, that’s cool, but I still say the coolest thing is seeing our team jump for joy when we ran a .76,” he said after his media center obligations. “I’m down there, going through the finish line, seeing the scoreboard, going ‘Cool, that’s a .76’ and that’s all I could do. But to see the team was super.

“Everything looks good, clean, really no big issues. We know the .76 isn’t going to be No. 1 qualifier tomorrow unless it rains all day, but hey, it’s cool! It’s a great start.”

A good-looking new Rust-Oleum paint scheme and a chart-topping run are great for the team, but after a day that started very early for a number of the crew due to travel, post-race Friday is about relaxation and preparing for Saturday.

“The car looks good!” Zizzo said. “We got a lot of compliments about how good our car looks which is wonderful! But we’re exhausted. We’ve been working non-stop, some of our guys were super late flying here and they’re on two hours of rest. We’re going back to the hotel, gonna have a cigar and a little bit of Maker’s and enjoy the evening next to the pool and then take a long nap until six in the morning!”

Saturday’s rounds of qualifying begins at 1 p.m. with the final round set to run at 4:15 p.m. Eliminations run Sunday at 11 a.m.

Fans of TJ Zizzo and Zizzo Racing can find updates and photos of the Rust-Oleum Top Fuel team by checking out ZizzoRacing.com, Twitter at @ZizzoRacing, Instagram at @TJZizzo, and Facebook.com/TJZizzo.