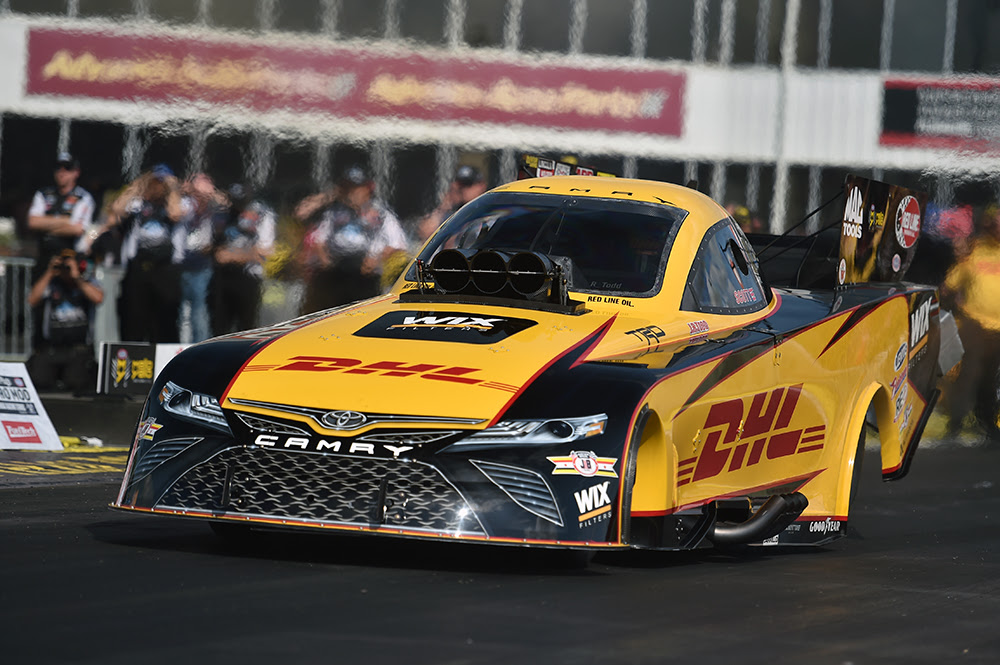 J.R. Todd and the DHL Toyota Camry Funny Car team raced to the quarterfinals today at the Arby’s NHRA Southern Nationals at Atlanta Dragway. They had a strong race car throughout qualifying holding down the provisional No. 1 spot at the end of the day on Friday. The final session of qualifying was washed out by rain showers so the team went into race day as the No. 2 qualifier with only three qualifying sessions under their belts.

“Being able to run in the hot and cooler conditions gives me a lot of confidence as a driver. I know going into every race that I will have a great team behind me and they can adapt to different conditions,” said Todd on Friday night. “That is what makes (crew chiefs) Todd Smith and Jon Oberhofer so special. It was sketchy out there (Friday night). For one I struggle driving when it is dark and then you bring in humidity and moisture so the track is tricky. I had my hands full down track. We were lucky to hang on. I think we just hit it right and a lot of other people just messed up.”

In the opening session on Sunday Todd advanced past Jim Campbell when Campbell jumped the tree earning an automatic disqualification. It was a lucky break for Todd considering his Toyota Camry smoked the tires a few hundred feet into his run. It was the kind of fortunate break than many times leads to victory on race day.

In the second round Todd’s luck and the skill of his crew chiefs were not enough to overcome tricky track conditions. The DHL Toyota Camry and Todd left first but again suffered tire smoke almost immediately. The reigning Funny Car champion had to give up on the run and watch helplessly as Tommy Johnson Jr. advanced to the semifinals.

“We just didn’t get a handle on the track today,” said Todd. “This was one race and I am focused on Richmond now. This DHL Toyota Camry Funny Car is going to be just fine. We will head to Richmond with the right attitude and get back after it in a couple of weeks.”

Quotable:
Todd on receiving his championship jacket and ring on Thursday night: “That was a cool deal on Thursday to be able to get your ring and jacket in front of all the past champions. Guys you look up to as a kid. I have to thank Coke and Mello Yello for allowing us to do that. It would definitely be special to win their home event.” 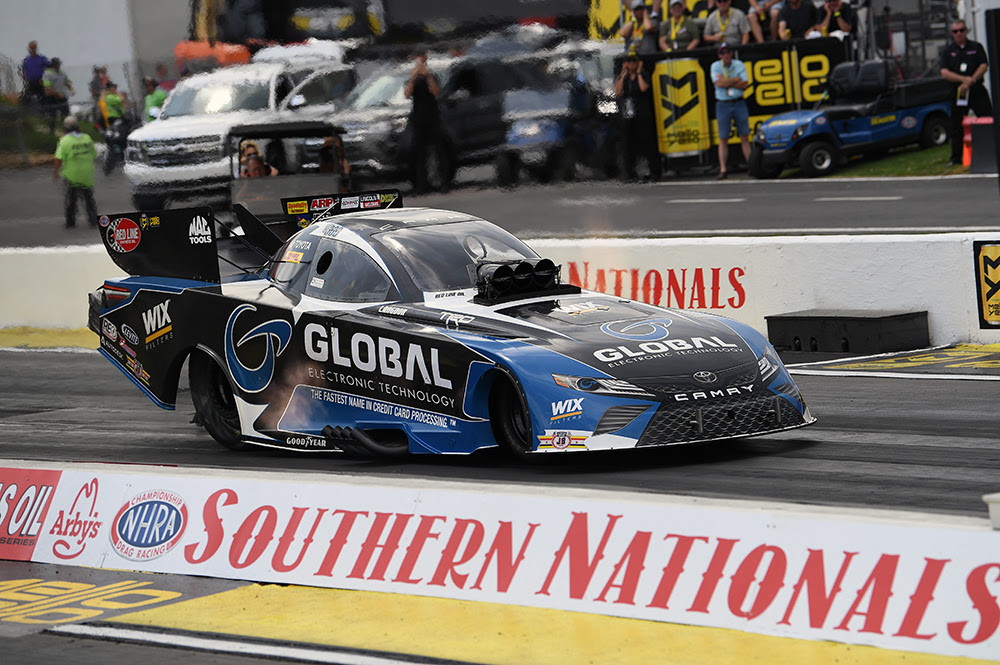 Second Win for Langdon Does Not Turn Up In Atlanta

One week after picking up his first career Funny Car win Shawn Langdon was eager to make it two in a row. The Global Electronic Technology Toyota Camry team rolled into Atlanta Dragway with confidence and momentum on their side.

Right out of the gate on Friday Langdon posted the quickest elapsed time of the session, 3.987 seconds at 322.11 mph. It earned the second year Funny Car driver three qualifying bonus points and positioned his team for a strong weekend of qualifying. They did not pick up any more bonus points but the Global Electronic Technology Funny Car was in the mix entering race day as the No. 6 qualifier.

Langdon drew a tough first round opponent in Ron Capps but he was focused on having lane choice and moving on to the second round. Langdon got the early jump off the starting line with a solid .060 second reaction time and was in position to pull away from Capps.

“I was fired up to have lane choice and we had just seen J.R. get his first round win,” said Langdon. “I knew I had a good race car for sure. It just started moving around on me and I had my hands full. We got the win last week and we were gunning for a second win. It just didn’t work out today.”

Langdon’s Toyota Camry Funny Car dropped a cylinder and began moving around out of the groove. The Carolina Four-Wide Nationals winner had his hands full as he tried to keep it centered but the tires lost traction. As Langdon crossed the finish line the engine expired with a quick flash and bang to officially end his day at Atlanta Dragway.

Quotable:
Langdon on first Funny Car win: “It started to sink in over the week. I have so many people to thank from everyone at Global Electronic Technology to everyone at Toyota and all my Kaliita teammates. They supported and encouraged me every day and I am just glad we got that first win. I know there will be more down the line. I also have to thank all the fans for their support. It was really cool to see all the social media posts after the win.” 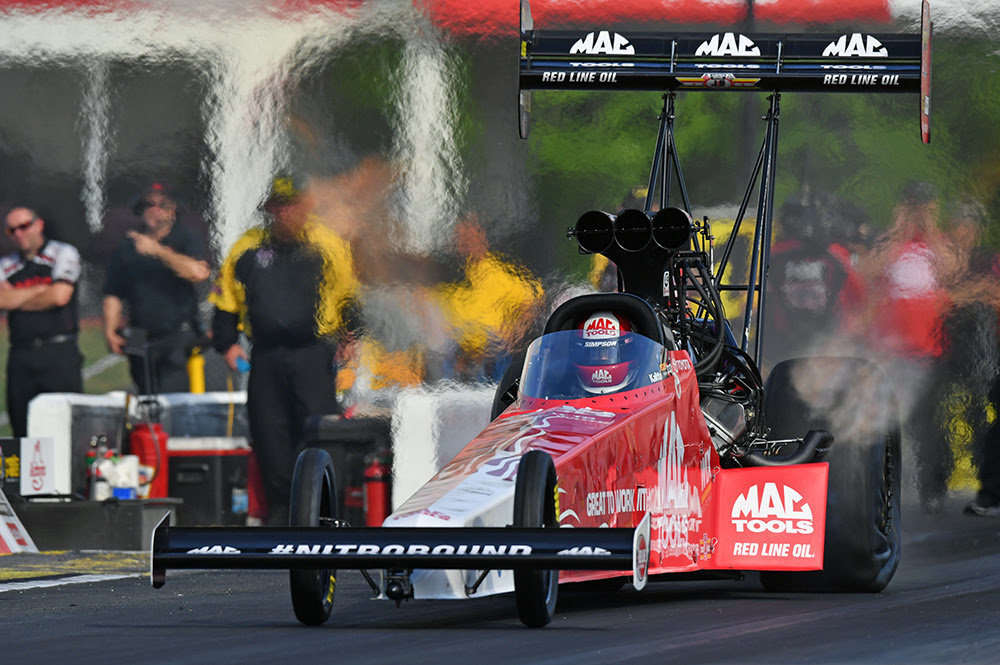 For the first time in the 2019 Mello Yello Drag Racing Series season Doug Kalitta and the Mac Tools Top Fuel dragster did not race beyond the first round. The three-time Arby’s Southern Nationals winner was eyeing a chance to become the winningest Top Fuel driver in the history of the event but those goals will have to wait for another season.

A strong qualifying effort on Friday saw Kalitta pick up two qualifying bonus points as the third quickest Top Fuel dragster of both the first and second qualifying session. The team only got one shot at the track on Saturday before persistent rain showers cancelled the final qualifying session. Still Kalitta and the Mac Tools team felt confident as the No. 3 qualifier in their match-up with Shawn Reed.

Kalitta and the Mac Tools dragster pulled up to the starting line with Reed as the fourth pair of Top Fuel dragsters to take the track on Sunday morning. The previous three pairs had seen improved elapsed times from the majority of the racers.

Kalitta was first off the line but as his Mac Tools dragster approached the 500 foot marker his Goodyear tires lost traction and Reed moved around him for the win.

“I felt like we were on a good run and just as it got to half-track we just overpowered it,” said Kalitta. “You have to be aggressive to get wins in this class. We just missed it by a little. I am really proud of this Mac Tools team because we had to battle the weather and a tricky track.”

Quotable:
Kalitta on quick exit: “This is the first time we haven’t moved on to the second round this season. This was just a tough day but we will put it behind us. We have a win and have been going rounds. This Mac Tools team will be ready for the next race.” 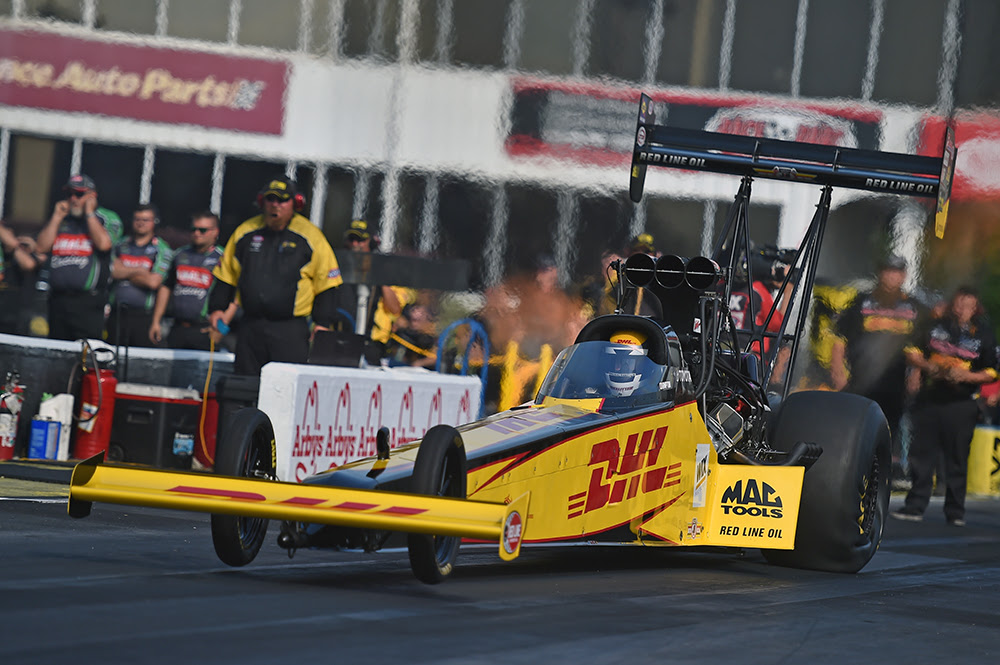 Early Exit Does Not Discourage Crampton and DHL Team

Tricky track conditions and the loss of a qualifying session did not do the DHL Toyota Top Fuel team and driver Richie Crampton any favors this weekend at the Arby’s Southern Nationals. Racing from the No. 7 qualified spot Crampton faced off with tough competitor Scott Palmer in the first round at Atlanta Dragway.

Crampton and Palmer were the last pair of Top Fuel dragsters in the first session. Both dragsters launched hard and just as Crampton’s DHL Toyota dragster was approaching half-track it began to overpower the racetrack. The 2019 Gatornationals winner had to watch as Palmer got to the finish line first for the win.

“We were just a little snake bit today,” said Crampton. “We got to watch all the other dragsters run and we felt like we had a solid tune up. We just overpowered the track and this one got away from us. No one is discouraged and we have a lot of confidence.”

It was an unfortunately quick end to the weekend but Crampton and the DHL team will regroup for the race Virginia Nationals in two weeks.

Quotable:
Crampton on back-to-back races in Charlotte and Atlanta: “I like the back-to-back races. We can get into a groove as a team. The weather didn’t cooperate this weekend but we aren’t making any excuses. This DHL Toyota team is definitely moving in the right direction. We will get ready for Richmond.”