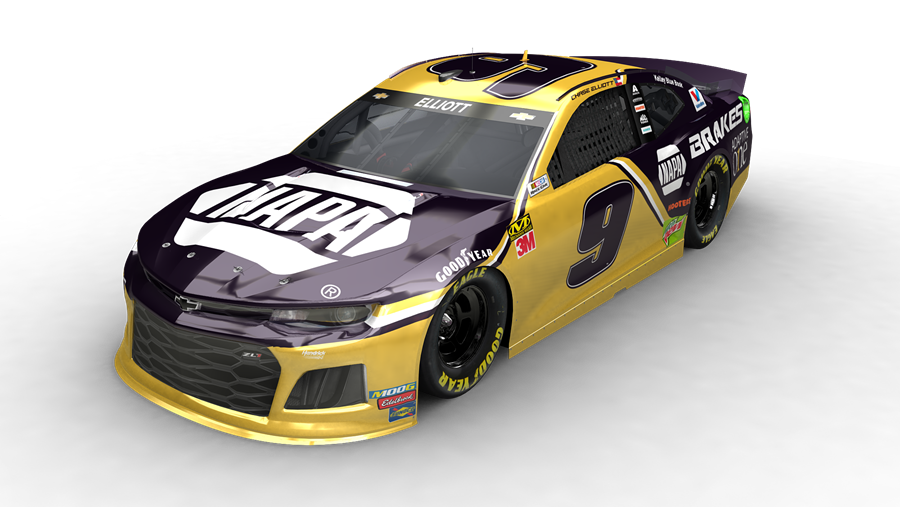 MEET THE NO. 9 PIT CREW: The No. 9 pit crew consists of rear-tire changer Chad Avrit, 36, from El Centro, California, who is a 12-year veteran in the sport; tire carrier Jared Erspamer, 33, from Omaha, Nebraska, who attended Northwest Missouri State University and was introduced to racing by his college football coach; fueler John Gianninoto, 30, from Tucson, Arizona, who played football for UNLV and was named Academic All-MWC team (2007, 2009) and served as captain in 2010; front-tire changer Nick O’Dell, 35, from Springfield, Illinois, who is a 16-year veteran in the sport; and jackman T.J. Semke, 26, from Lee’s Summit, Missouri, who was a defensive lineman for three years at the University of Kansas, earning Academic All-Big 12 Second Team Honors in two of the three years he played for the Jayhawks.

ALL-STAR AUTOGRAPH SESSION: Elliott will sign autographs for fans as part of Charlotte Motor Speedway’s All-Star weekend on Saturday, May 18, at 4:45 p.m. local time. Approximately 150 wristbands will be distributed on a first-come, first-served basis on Saturday starting at 11 a.m. ET in the Charlotte Motor Speedway midway area. Each fan who has a wristband will receive a commemorative poster.

NAPA BRAKES RETURNS: This weekend, the No. 9 NAPA Brakes Chevrolet Camaro ZL1 will return at Charlotte Motor Speedway. Earlier this month, NAPA AUTO PARTS revealed the black-and-yellow machine on its newly relaunched Instagram account. The paint scheme coincides with NAPA AUTO PARTS’ May brakes promotion and was recently run at Dover, where Elliott started from the pole position, led a career-high 145 laps and finished fifth.

NAPA BRAKES: This weekend, Elliott’s NAPA Brakes paint scheme will promote NAPA AUTO PARTS’ brakes special that will run throughout the month of May. Customers can get up to $75 off a qualifying NAPA brake parts purchase of $250 at participating NAPA AUTO PARTS stores and NAPA AutoCare centers. 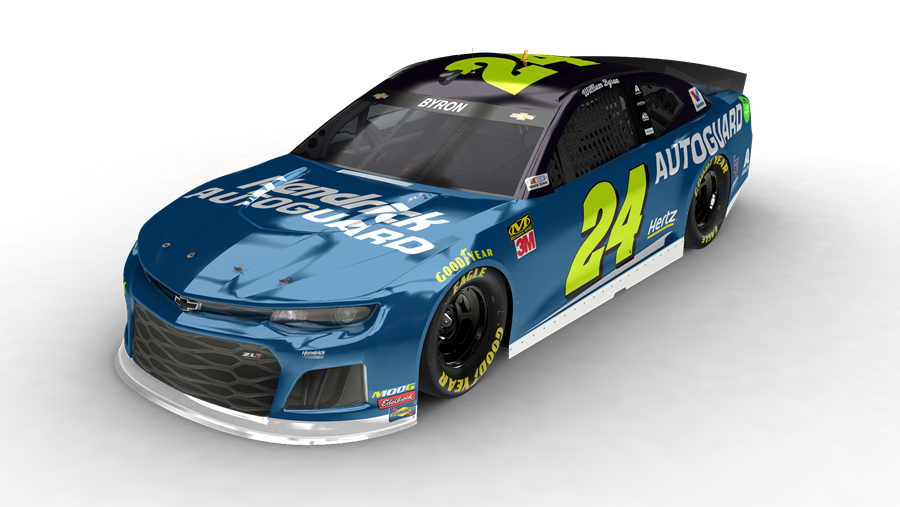 ALL-STAR ASPIRATIONS: As a rookie in the NASCAR Cup Series last year, William Byron was not locked into the 2018 All-Star Race at Charlotte Motor Speedway. Competing in his first Open to try to race his way in, Byron was challenged with a new rules package and limited time behind the wheel with it after weather canceled part of on-track activities last year. Lining up by points for the qualifying race, Byron fought to gain track position through the first stage, and despite running within the top five for almost the entirety of the race, came up just short of transferring to the main event and battling for his chance of winning the $1 million prize. Returning for redemption, Byron will have three chances to race his way into what would be the first All-Star Race of his career by winning any of the stages in this year’s Open.

HENDRICK AUTOGUARD IS HERE: For the first of five races in the 2019 season, Hendrick Autoguard will make its debut on Byron’s No. 24 Chevrolet Camaro ZL1 this weekend for Charlotte Motor Speedway’s All-Star Race.Hendrick Autoguard is a premier vehicle protection program available at Hendrick Automotive Group dealerships, which includes additional individualized maintenance products like tire and wheel protection, paintless dent repair, oil change program, mechanical repair service contract, flexible maintenance, and more. The program offers customers numerous options to get the maximum value from their vehicle with the highest level of service in the industry. All Autoguard vehicle protection programs are available as single products or value-packaged for additional savings. For more, visit the Hendrick Autoguard website.

MEET THE NO. 24 PIT CREW: Going over the wall every weekend for Byron and the No. 24 team, the No. 24 pit crew has been working alongside each other for five years – the longest of all of the Hendrick Motorsports pit crews. The crew includes front-tire changer Austin Dickey, 28, from Ashtabula, Ohio, an eight-year veteran at Hendrick Motorsports; jackman Eric Ludwig, 32, from Burlington, North Carolina, who played defensive lineman and nose tackle for Elon University; tire carrier Scott Riddle, 30, from Ramseur, North Carolina, who set multiple Southern Conference records while playing quarterback at Elon and played baseball for a season as well; rear-tire changer Johnny Roberts, 30, from Titusville, Florida, whose background is in surfing; and fueler Landon Walker, 30, from North Wilkesboro, who played offensive tackle at Clemson University setting a school record in snaps played and consecutive games.

HOME SWEET HOME: Cutting his teeth in the racing world in Charlotte, North Carolina, Byron is one of only a handful of drivers who was born and raised in the “home of NASCAR.” After visiting U.S. Legend Cars International headquarters in Harrisburg, North Carolina, with his father in 2012, Byron found himself behind the wheel for the first time the next year competing in the Young Lion Division. Winning 33 of the 69 legend car events he ran across the United States in 2013, Byron went on to lock up the U.S. Legend Young Lions National championship and the Thursday Thunder Young Lion championship at Atlanta Motor Speedway. Progressing to the Legend Car Pro Division the next season, Byron also signed with JR Motorsports developmental program at the same time. From that point on, Byron hasn’t slowed down at all as he climbed the racing ranks before ultimately making it to the top level of NASCAR as a Cup Series rookie in 2018.

HOME TRACK FEEL: In addition to Charlotte Motor Speedway being the home track of Byron, a handful of members of the No. 24 team also claim this as their home track including engineer Matt Piercy, from Conover and interior specialist Jacob Bowman, from Pilot Mountain. Three members of the No. 24 pit crew also call North Carolina home – Ludwig, Riddle and Walker.

KNAUS’ KNACK: Having made 17 starts as a crew chief in the All-Star Race, No. 24 team crew chief Chad Knaus is looking to make it 18 when he gets to the track this weekend with Byron. In his 17 starts in the million-dollar event, Knaus has gone on to claim the top prize four times despite an ever-changing format.

CHEVY STAGE: Byron will make an appearance at the Team Chevy stage on Saturday, May 18, at 3 p.m. local time at Charlotte Motor Speedway. Fans can visit the Chevy stage in the midway to see the Q&A with Byron. 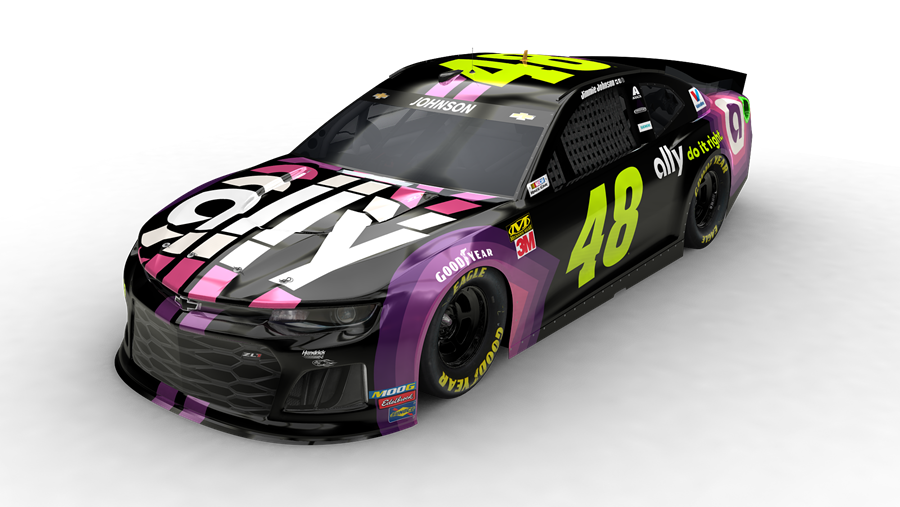 Jimmie Johnson will be available to members of the media on Friday, May 17, at 3:45 p.m. local time in the media center at Charlotte Motor Speedway.

PRECURSOR TO THE 600?: Jimmie Johnson is one of seven drivers to have accomplished the feat of winning the All-Star Race and going on to win the 600-mile event at Charlotte Motor Speedway the following weekend. Johnson joins the likes of NASCAR Hall of Famers Jeff Gordon, Dale Earnhardt, Davey Allison and Darrell Waltrip as well as former teammate Kasey Kahne and current competitor Kurt Busch. Johnson won the 2003 All-Star Race and then backed it up with his first win in the 600 the following weekend.

FOUR ALL-STAR WINS: Johnson has won the All-Star Race a record four times, which is more than any other driver. His first win came in 2003 when the race was called “The Winston.” Johnson then took home a victory in 2006 and went back-to-back in 2012 and 2013. Johnson also has eight points-paying wins at Charlotte Motor Speedway, the most of all drivers.

ALLY UNVEILS 600 CAR: This week, Johnson and No. 48 team partner Ally revealed a military-themed camouflage paint scheme for the No. 48 Ally Patriotic Chevrolet Camaro ZL1 in tribute to Army Sgt. Richard Donlan, who died in combat during the Vietnam War. The patriotic car is part of the NASCAR Salutes initiative to honor fallen soldiers during the Memorial Day weekend race at Charlotte Motor Speedway. Johnson revealed the car during an event at the Hendrick Motorsports campus as 50 volunteers from Ally, the USO and the No. 48 pit crew assembled approximately 1,000 care packages and pocket-size American Flag folds for active service members. Sgt. Donlan’s nephew, Laine Donlan, who is an Ally employee and member of Ally’s veteran employee resource group, assisted Johnson in revealing the car and honoring his uncle. Click here for more.

ALL EYES ON THE CREW: The No. 48 Ally crew will have the opportunity to shine during the All-Star weekend as the team will make a four-tire pit stop during qualifying on Friday evening to help set the field for the event. Members of the No. 48 crew include: tire changer Calvin Teague, from Taylorsville, North Carolina, who was a baseball pitcher at Appalachian State University; fueler Brandon Harder, an Oak Harbor, Ohio, native; tire carrier Allen Stallings, from Manteo, North Carolina, who was a linebacker who broke every major tackle record in Greensboro College football history; tire changer Tanner Andrews, from North Aurora, Illinois, who was an award-winning Greco-Roman wrestler at Northern Michigan University and competed at the U.S. Open four times; and jackman Kyle Tudor, from Augusta, Georgia, who formerly played linebacker at East Carolina University.

AUTOGRAPH SIGNING TRACK-SIDE: Johnson will sign autographs for fans as part of Charlotte Motor Speedway’s All-Star weekend on Saturday, May 18, at 4:45 p.m. local time. Approximately 150 wristbands will be distributed on a first-come, first-served basis on Saturday starting at 11 a.m. ET in the Charlotte Motor Speedway midway area. Each fan who has a wristband will receive a commemorative poster.