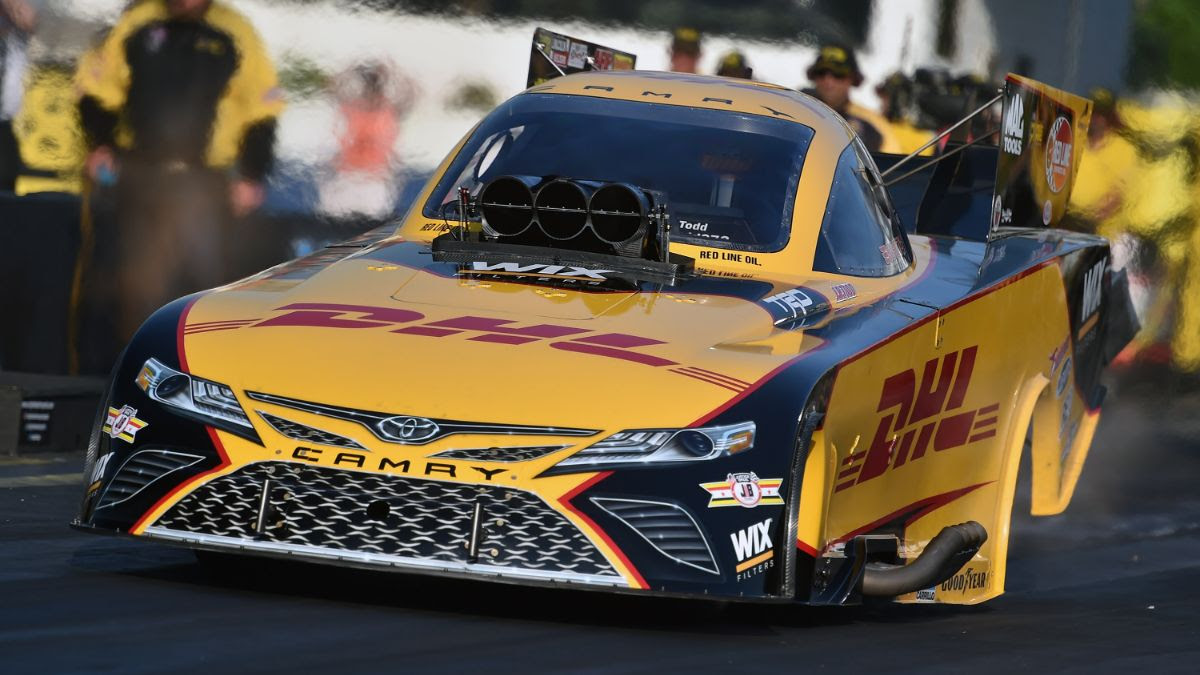 For the ninth time in fifteen races J.R. Todd and the DHL Toyota Camry Funny Car raced to a final round. This season Todd has raced in three finals with a big win at the Las Vegas Four-Wide Nationals and today the reigning Funny Car world champion just missed another winner’s circle. After blasting past three competitors including teammate Shawn Langdon, Todd overpowered the track for a still to be determined reason in the final.

“We are still going over the run,” said Todd. “We are not exactly sure what happened. There is really no excuse because the guy next to us when down the track. It is definitely not the way we wanted to end the day.”

As the No. 4 qualifier Todd was poised to pick up his tenth Funny Car career win. In the first round the DHL Funny Car led every segment of the race from starting line to finish line. Todd was first off the line with a .060 reaction time and his winning elapsed time of 4.074 seconds was enough to outrun his opponent’s 4.086.

In the second round against Team Kalitta teammate Shawn Langdon it was the best race of the session. Both Camrys took off and made clean runs down the track. It was a very close race at the finish line stripe with Todd getting the win 4.044 seconds to 4.081 seconds. The semifinals saw more of the same from the DHL Camry as it posted another 4.04 second run on the way to the final round.

The final round was anti-climactic as the race was over less than a second after Todd hit the throttle. The DHL Toyota Camry lost power almost immediately and the 2018 Funny Car champ was forced to ride it out until it rolled to a stop about 200 feet short of the finish line.

“It was still a good weekend for us,” said Todd. “We moved up in the points. I think we have a good hot track tune-up which is encouraging. It is not going to get any cooler.”
Over the coming weeks Todd has a lot of confidence in his team as the temperatures will begin heating up. The competition will continue to be fierce but track conditions could be a great equalizer. The success of his crew chief combination, Jon Oberhofer and Todd Smith, has shown the DHL Funny Car will be a tough team.

“I feel like Jon and Todd have a really good handle when the sun is out in the heat,” said Todd. “We just missed it there in the final. No excuse. We are going to go back to the shop and regroup and get ready for Chicago.”

Quotable:
Todd on racing teammate Shawn Langdon in second round: “It is tough racing anybody out here in Funny Car. I am not going up there and thinking about racing a teammate. You have to just put it in your mind that this is one of the best leavers on the circuit. You have to do your job on the starting line. It was a great race. We were the only two cars that went down the track. I treat him like any other competitor out here.” 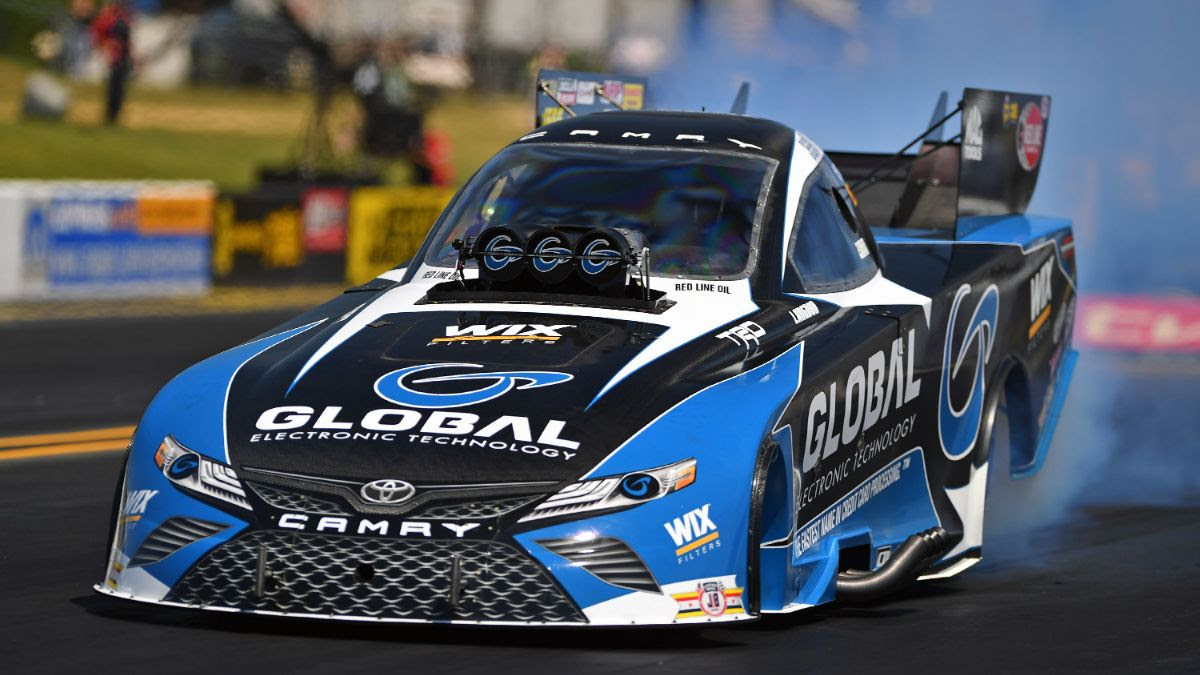 Heading into race day Shawn Langdon and the Global Electronic Technology Toyota Camry Funny Car team knew they had a quality race car. They succeeded in qualifying in the top half of the field over the first two days at the Virginia NHRA Nationals. Langdon entered eliminations as the No. 5 qualifier, equal to his best start of the season and faced a first round match-up with veteran Tim Wilkerson.

The Global Electronic Technology Camry never trailed in the first round with Langdon grabbing a starting line advantage, a .085 to .099 reaction time, and then a finish line elapsed time advantage of 4.039 seconds to 4.054 seconds. The win advanced Langdon to a tough second round match-up with teammate J.R. Todd.

In the quarterfinals the teammates watched as pair after pair of Funny Cars struggled to get down a hot race track at Virginia Motorsports Park. The final pair before Langdon and Todd smoked the tires almost immediately and had to pedal their race cars repeatedly to get them to the finish line. Langdon knew his crew chief combination of Nicky Boninfonte and Del Worsham had a tune-up that would get him down the track.

“We talked about that,” explained Langdon, with regards to the pre-run adjustments. “We made the proper adjustments to get the car go down the track and it made a great run. It went 4.08. I stole a smidge off the starting line and it probably ran a high 4.06 or low 4.07.”

Both Kalitta Toyota Camry Funny Cars launched hard with Langdon grabbing a slight starting line advantage but he was unable to pick up his second Funny Car win of 2019. In a cruel twist both Toyota Camrys made solid runs, 4.044 to 4.081 seconds, respectively but only Todd advanced. Langdon’s run would have eliminated every other Funny Car in the quarterfinals.

“We have a good car. We made good runs and qualified well. This has just been a little bit of the story of our year,” said Langdon. “We just run into that buzz saw round. In a situation where you have cars in front of you blowing the tires off at the hit. J.R. just made a hell of a run. There is not really much you can do outside of saying ‘Great job’ and then you cheer on your teammate the rest of the day. It would have been a good time to make up some ground in the points for sure. We are in a good position because the car has made some great improvement.”

The loss did not sit well with Langdon but he knows he has a Funny Car that can do some damage as the Mello Yello Drag Racing Series moves into a tough four race stretch in hot conditions.

“Having a week off and going into that four race stretch our confidence is at an all-time high,” added Langdon. “That is part of drag racing. I told my guys we have nothing to hang our heads about. We have a great car and we did a great job. We made the proper adjustments. It just didn’t go our way today.”

Quotable:
Langdon on losing close race to teammate J.R. Todd: “We just had the bad luck of running the one guy that was a little quicker than us. It is fortunate that it was our teammate that got the win. Hopefully he will go on and win the whole race. We are going to take all this information we learned and keep making quality runs.” 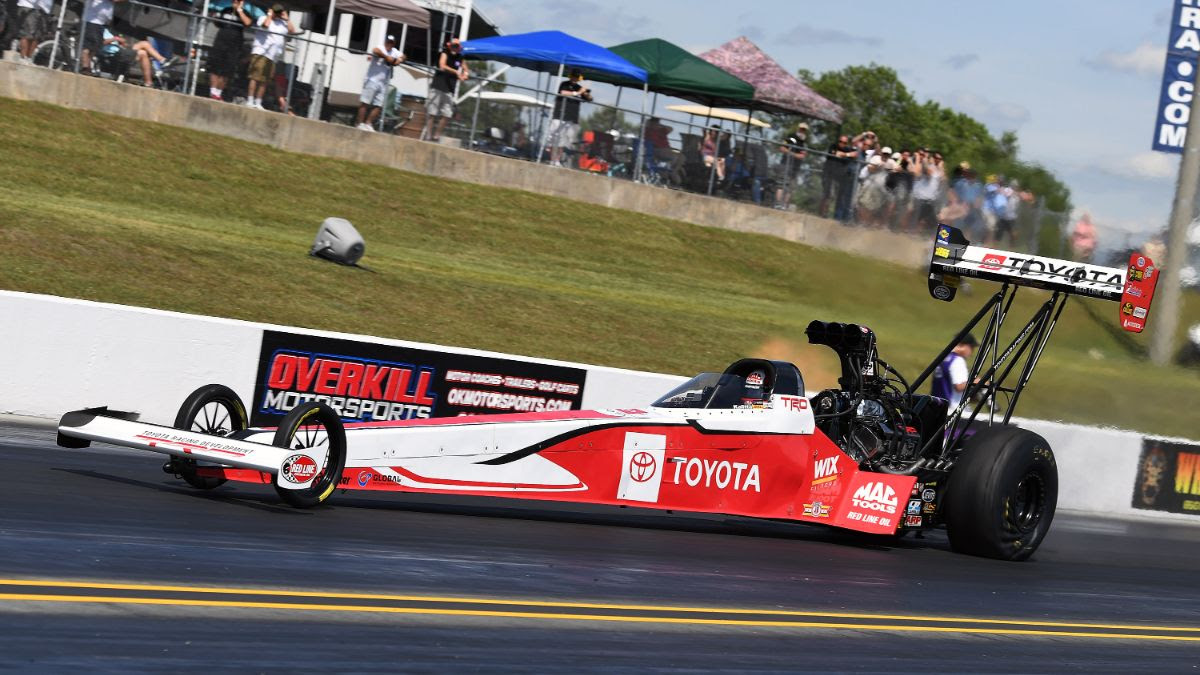 For the second time this season Doug Kalitta powered the Toyota Top Fuel dragster into race day with a solid chance of picking up his 46th career Top Fuel victory. The 2007 Virginia NHRA Nationals winner was the No. 5 qualifier had made significant runs in qualifying on Friday and Saturday.

Heading into race day Kalitta was facing off against the steadily improving Scott Palmer. Kalitta took a starting line advantage and almost immediately went into tire smoke. He was forced to watch as Palmer pulled away for the win.

“I thought we had something for them with this Toyota dragster today,” said Kalitta. “This is frustrating. We have been going down the track good. It is just one of those deals. We are going to go back and figure out how it happened. It is definitely disappointing. We are coming up on the hot track and we have to figure out what we need to do.”

In two weeks Kalitta will be back on track with a renewed focus to getting his second win of 2019. The Winternationals winner has been consistently going rounds and the veteran driver knows that this next run of four races will be key to the teams mid-season success.

“I am looking forward to the busy racing schedule. We can get into a groove and just start going rounds. That is what we need to do with this Toyota Mac Tools dragster. We just want to win as many of these races as possible. Going out early really sucks. Going rounds is what you have to do out here,” added Kalitta.

Quotable:
Kalitta on Richmond crowd: “They had a great crowd all weekend. Lots of the fans were coming by telling us how cool this Toyota dragster looked. We were glad to be running this Toyota Top Fuel dragster again.” 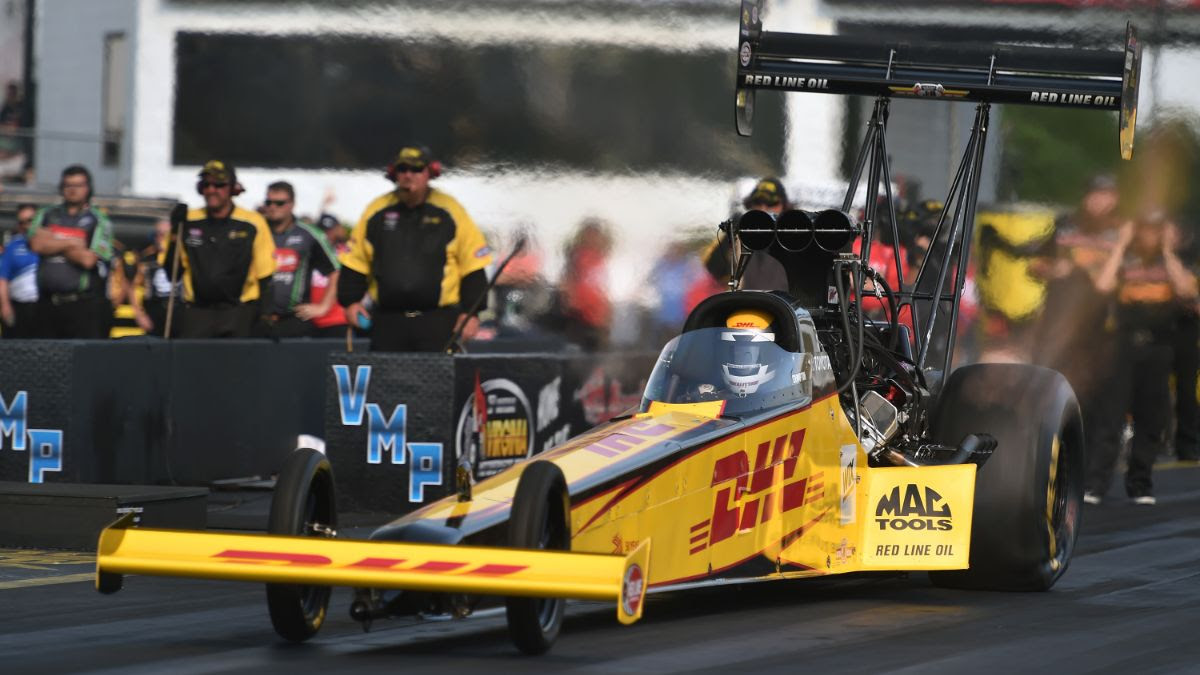 Crampton and DHL Leave Virginia
with Confidence and Focus

Richie Crampton and the DHL Top Fuel dragster will leave Virginia Motorsports Park with the confidence of a team that is moving in the right direction. The team came off the trailer on Friday and made one of the quickest runs of the session picking up a qualifying bonus point and positioning themselves for a successful weekend.

Over the next three qualifying sessions Crampton continued to make quality runs and entered race day as the No. 7 qualified Top Fuel dragster. The young Australian faced off with rookie Austin Prock in the first round of eliminations.  Both dragsters launched hard and were practically welded together going down the track. At the finish line stripe it was Crampton coming up about half a car length short of advancing to the quarterfinals.

“For sure the biggest positive for me is we qualified top half and went down the race track pretty good on Friday and Saturday,” said Crampton. “We made a solid run in the first round but we just didn’t quite bring enough to the table. It stings a bit but the car is going down the race track so we are right there.”

The 2019 Gatornationals winner has a lot of confidence in this DHL team led by Kurt Elliott and legendary driver and crew chief Connie Kalitta.  The team will head into a tough four race stretch starting in two weeks at the Route 66 NHRA Nationals outside Chicago.

“I really feel like this DHL dragster is only going to get better. Kurt Elliott, Connie Kalitta and all the guys have a good handle on a hot race track,” said Crampton. “We also have a good tune up for a cool track as well for Friday night qualifying. It is exciting for me to know I have this DHL team behind me. We have a really good race car and we just need to put it together on race day.”

Even though Crampton did not hoist the winner’s trophy he felt like the weekend was a success. This DHL Top Fuel dragster made solid and quality runs and the fans at the Virginia NHRA Nationals saw an excellent race.

“This was an awesome race. The excitement in this part of the country for NHRA racing and what the new owners have done to this race track is really impressive. There was a great crowd and we have a lot of great crowd interactions. I am looking forward to getting back here next season. It is a super smooth race track. You couldn’t really ask for much more.”

Quotable:
Crampton on racing for Connie Kalitta: “It is pretty awesome to have Connie Kalitta in your corner but it can also be intimidating. He has been there and done that. There are not that many people out here that have the kind of experience he has. He is a wily racers and that is what helps give me confidence going deeper into race day on Sunday.”